New – sail on the P-18 on youtube using the link below!
Take a Virtual Sail in Rhode Island on a Precision 18
I have owned a Precision 18 Sailboat for 3 years. You can read up about the basic specs on the Precision Boats web site, but here are the basics:

This is a small sloop sailboat (main sail and jib) which is less than 18 feet long. It weighs in at only 1100 lbs – although most users should add at least 100 lbs to that for an outboard, some basic gear and a porta-pottie. It features a stub keel with very low draft, as well as a swing down centerboard which can be raised and lowered via a simple rope in the cockpit.

The weight and size of this boat put it firmly in the “trailer sailor” category, meaning it is very easy to tow it to your destination. The total weight of boat and trailer ends up being well less than 2,000 lbs – which means most cars and trucks with towing capacity will easily handle it. My boat, however, is kept in the water on a mooring about 1000 feet from a beach in RI. This is very convenient when compared to trailering as it only takes 10 minutes from when I step onto the boat to be underway and under sail. In fact, I am such a strong believer in storing the boat in or right near the water (mast up) that I would not own a boat unless this was the case! The amount of work involved with trailering, launching and rigging is just too great IMHO. 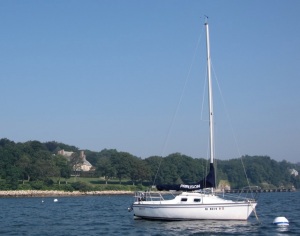 Precision 18 at mooring in RI

The P-18 is the first sailboat I have owned. I occasionally sailed very small (sunfish) sailboats when I was very young, but those skills have been long lost. I again took up sailing in my mid-50’s (2008). Previous to the purchase of the Precision, I took 2 days of sailing lessons in Sarasota, FL and received my basic keelboat ASA certification. This provided me with the basics, although it took many hours of actual experience on the P-18 to hone my skills and feel comfortable in most normal conditions.

The Boat
My boat is a 2007 Precision which I purchased new – but as a “leftover”. The financial crisis of 2008 provided an opportunity to pick one up at a good price. Bart, the general manager of Precision Boat Works (Palmetto FL) had my email due to my earlier visit to the factory, and he informed me of this boat which was at a dealer an hour away from me.
As an aside, Bart is a great guy and welcomed our visit to the Florida factory. He has been very good at answering questions and concerns after the sale.

My Sailing Grounds
A review such as this should take into account where the boat is used – so that sailors can compare conditions at their own locale and determine the suitability of a particular boat. Our P-18 is sailed in the Sakonnet River (strait), the easternmost arm of Narragansett Bay. This is a tidal strait with a width of 1-2 miles (E-W) and a length of 8 miles (N-S). Prevailing breezes are from the south, meaning an almost unlimited “fetch” to create wind driven waves and chop. Typical summertime conditions consist of a gentle morning breeze of 5kts building up to 10+ (gusts to 14) knots by 4PM and then settling back down as sunset approaches.

Sakonnet River - right side of map

The currents, fetch and waves often combine with tidal and wind forces to create 2′ waves of a fairly steep angle – that is, these are not your typical ocean swells. Friends who sail told me I would be wise to consider a fairly large and heavy boat for sailing these waters. The P-18, of course, is neither large nor heavy, but with some learning and adjustment I have been able to be perhaps the single most active sailor on the waterway…that is, I put in more hours on the water than any other boat I am aware of. This is a testament to the boat especially since it is smallest boat I have seen in the area.

Overall Rating
The P-18 fulfills all my expectations and then some. As far as the construction, I have had absolutely no problems. The boat is very easy to rig and to single hand, making it perfect for the occasional day sailor.

Chop on the Sakonnet

Pros and Cons
Rather than categorize the tendencies of this boat as either positive or negative, let me present how the boat operates and allow the prospective purchaser to decide whether a boat of this type or size fits them.

Sailing Style
The first thing folks should keep in mind is that this is an active boat. In most weather, this boat needs to be sailed with one hand on the tiller and the other on the main sheet, with constant adjustments of both being made on a constant second-by-second basis. This is not a cruising boat – it would be closer in operating style to many “sport boats” or sailing dinghies. This is due to a number of factors, among them being the short waterline and lightweight keel. A crew of 2 could easily outweigh the keel, which is a rare thing on keelboats. Small boats such as this are best sailed either single or double handed, although I have had up to 4 people in the cockpit for short rides

“Active” sailing in this case means not only constant tending, but also proper positioning of the crew – every small movement of the crew will change the heel angle of the boat.

Land Ho!
The P-18 features a swing keel which is raised and lowered using a small rope located in the front of the cockpit. When raised, the boat drafts less than 2 feel of water. This means you can likely sail much closer to show and in shallower water than most sailboats. It also allows the boat to be brought almost up to a beach or shoreline. I often run my P-18 close to shore to pick up family members and friends for a short sail. They can wade in about 18″ of water and then climb onboard using the rear swim ladder.

Accommodations
C’mon now! This is a boat which is less than 18 foot at the water line! Amazingly enough, it does have a nice cabin which is great for storing things such as your jib, your boat hook, extra life preservers and more. There is a forward hatch in the cabin which allows you to access the bow of the boat for hanking on the jib and/or casting off your mooring lines.
Yes, there is plenty of room for a porta pottie if you want one….
The cabin does have two berths if you ever did want to lay down or (shudder) sleep on it, but this would be akin to sleeping in a pup tent. If you are not comfortable with confined spaces, then you probably don’t want to attempt it!

Lines and Rigging
One of the neat things about a small sloop like this is that no winches are needed for trimming or raising the sails. All the halyards and sheets use simple cam cleats, which work well. You will need a bit of effort, however, to raise the sails and tighten them well.

Motoring along
I use a Yamaha 4 HP 4 stroke outboard for aux. power. This boat would do very well with less power, as I never have to turn the engine up past 1/4 or so. For many situations, a 2hp gas or equiv. electric motor should do the job nicely. The small integrated gas tank in the outboard should do the job nicely. I carry a one gallon plastic gas can in the port side rear seat locker – this lasts me the entire summer!

Power and Lights
The P-18 has a small fuse panel along with various lights to meet Coast Guard standards. There is a place for a marine battery in the starboard side seat locker. I purchased a battery and installed it – and then realized that I’d rather save the weight and complexity since I have no need for onboard electric power.

Extras
The Precision Boats come standard with just about everything you need to go sailing. Options and additions which my boat has are as follows:
1. Boom Vang – Factory option.
2. Tiller Lock – this neat device allows you to take your hand off the tiller for at least a few seconds – I would not want to sail a boat without some kind of tiller lock.
3. Porta Potty – we have one of the basic thetford models (marine 135) which works well for the occasion when you need it…..(#1 only if possible, as is true with all portable toilets!).

Factory Support
Precision is built in Florida by a small privately owned company. They have been building small boats for decades and know how to do it well. In fact, they build some really nice boats for other manufacturers, including the Colgate 26 and some larger Swedish rigs.
This is a mom and pop (actually brother and brother) business where you get to talk to the people who can solve any little problem you might have. The folks at the factory held my hand…even with stupid questions such as “How far over should it be heeling” and newbie stuff like that. You can rest assured of support from both the factory AND from other Precision Owners! There is a forum and an independent web site dedicated to the brand.